The highest limestone massif in Europe is protected in the Ordesa and Monte Perdido National Park. It is an enormous karst area of canyons, rock faces and overhangs, limestone walls and imposing peaks. There is an abundance of literature about the National Park and you would need several weeks to discover all the nooks and crannies, but in just four days (or two weekends) you could enjoy getting to know the main features of this exceptional geological phenomenon. We suggest four excursions to the four areas of the National Park: Ordesa, the Añisclo Canyon, the Escuain Gorges and the Pineta Valley.

Crowds flock to this valley as it is the most well-known and emblematic part of the National Park. The main trail, which is always the busiest, goes alongside the River Arazas towards the Soaso Cirque and the Cola de Caballo (Horse’s Tail) Waterfall, dipping between pools and waterfalls, and woods of beech and silver fir. In high season there is almost a constant procession of people along this trail.

There are several alternative routes if you want to avoid the crowds, some of which allow you to observe the valley and the massif from higher up. These include the 4 x 4 trail or the more demanding Faja de Pelay, a spectacular path at 1900m which goes from the Calcilaruego viewpoint to the Soaso Cirque with only a small uphill climb.

The spectacular canyon of the River Bellos was formed by glacial and karstic erosion. It is formidable: long, extremely deep and narrow and surprisingly verdant. It is hardly visited by tourists beyond the ermita de San Urbéz (Chapel of Saint Urbicius) where there is a popular hour-long circular route. However, not many people venture along the bottom of the canyon which is a unique, unforgettable experience.

We recommend an afternoon visiting the villages of Vío, Buerba, Sercué, Nerín and Fanlo to see some ancestral stone houses with the typical round chimneys. If you wander the streets of these villages it’s like being in a time warp, but it helps the inhabitants survive in these beautiful yet inhospitable surroundings.

The Escuain Gorge is the least visited valley in the National Park and therefore the most likely area for spotting wildlife.

Escuain and Revilla are the last villages in the region and are linked by a bridle path which crosses the River Yaga and is a pleasant, well signposted trail which takes you right into the gorge. Another village worth visiting is Tella, with its striking viewpoint giving you panoramic vistas of the Cinca basin, and the Castillo Mayor and Peña Montañesa peaks. You can visit the Casa de las Brujas (a museum of witches) and the Chapel of San Juanipablo, as well as enjoying morcilla (a type of black pudding) and longaniza (local sausage) tapas in one of the taverns.

The last stage of this trip could be to the Valle de Pineta, accessed from the noble village of Bielsa. The glacial origins of the valley are evident right from the entrance and, at the head of the valley the Monte Perdido Glacier feeds the lakes and waterfalls, filling the Pineta meadows and Atlantic forests with life. Access is easy and after just an hour’s walking you will be right up there where it feels almost Alpine. Along with Ordesa it is one of the busiest trails and we can show you some less crowded and less well-known alternative routes. 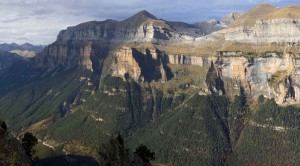 The Ordesa and Monte Perdido National Park has four interpretation centres with a wealth of information to help you make the most of your visit, whether you want demanding winter climbs, easy family walks or a trip in a 4 x 4. 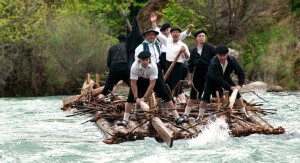 After each day of excursions in the Ordesa and Monte Perdido National Park there is plenty on offer in the surrounding area, such as visits to museums, chapels and historic towns and villages.

The mountain pastures in the Ordesa and Monte Perdido National Park are still used by the locals for grazing sheep and cattle, just as in times gone by when they drove their flocks each year from the lower plains up to the mountains. The lamb and steaks in this region are definitely worth trying.

Continental. Cold winters with heavy snowfall in the mountains and many sunny days. Nice summers.

The National Park can be visited at any time of the year and each season gives us the opportunity to know this natural jewel from different perspectives.
July and August are obviously the busiest months but our proposals help you to know the most unknown and quiet areas without being a tourist more.
In winter many of the routes are only accessible with rackets or skis, the experience is overwhelming.